So I left off camping next to a dry creek bed with a bunch of cows; my first day in WA. From there I did quite a bit of driving towards Broome, and found very few bees in this arid place! I did pass Wolfe Creek, but didn’t stay for the night (despite some temptation).

The landscape has been pleasant enough, fifty shades of arid is how I’d describe it! Many different ways and places of getting thirsty and sunburnt 😉

Anyway, after a lot of driving, and not a great deal of bee finding, I did find an awesome free campsite next to a lagoon, which was teeming with bird life! Naturally, I had to whip out the old zoom lens and see what I could see.

After the bird activity died down, I was greeted with an awesome sunset and amazing early evening storm. …I think that I may need to dial back the lagoon talk here, but it’s safe to say that I would love to come back one day, if nothing else but for the birds.

Next day (after an extended morning around the lagoon…), I set off for Broome. Along the way I saw some more awesome bottle trees, which made the ones growing in gardens and parks along the east coast look like sickly little things. I also stopped to have a look at some unattended back burning in the bush next to the road and watched the birds of prey circling the fire waiting for some misguided little mammal to make a runner.

I got to Broome, where I had a couple of packages waiting for me (or so I thought). I stayed a couple of nights and made a new friend and saw some sights to pass the time! I eventually received one package and moved on south towards Perth.

Once I was off I could not help but try to find a campsite close to water in order to find some more birds to photograph. So, next to De Grey River (the dry end of the river at least) I found some shallows with bird activity! Not only did I find birds though… The constant ‘popping’ on the water surface come evening (and the next morning) made me cast in a line! Well I got to land my first ever mangrove jack (8 or 9 of them in fact!). I also saw a ~1 metre bull shark(?) swirling through the shallow reeds looking for a feed! 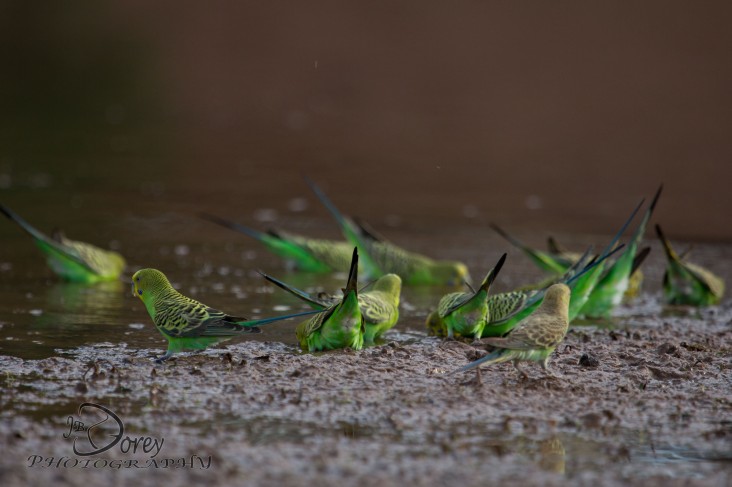 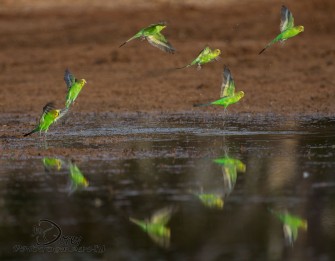 After another afternoon and morning taking photos of birds (not bees), I turned south again, driving to a mining town called Newman, which I camped near in another empty ‘campground’. Along the way though there was some pretty awesome scenery, some of which I could not help but climb (perhaps much to the confusion of passing motorists!). There’s not much else to say about that day, but that I stayed at a cool campsite a little off the road in some bush 😉

The next morning I started out, again looking for bees along the side of the road. I wasn’t having too much luck until I stopped to look at some big orange and purple flowers. Well neither of those had bees on them either come to think of it… But they did lead me to see some much smaller flowers, getting serviced by at least two species of bees, one of which was another species of blue-banded! 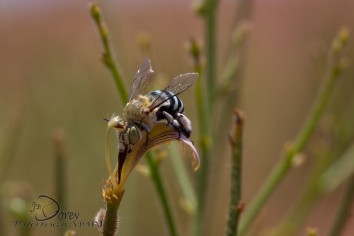 A few more blue-bandeds coming in for a feed!

After some excitement and sunburn from laying prone on the ground for a bit too long, I got back on the road and enjoyed the dry scenery. I particularly liked coming over a rise or just driving along and seeing a red pillar in the sky from dust devils on the ground, as well as the twisted trees in the cracked red soil.

My next campsite was quite good as well actually. I was greeted by an apparently very judgmental brown falcon… Yet I was again impressed by the twisted dead-looking trees in the area!

Anyway, next morning involved a bit more bird watching, as they came for the little puddle of water that I had parked next to, followed by a drive to Geraltdon! The road was actually quite good, and featured goats, sheep, kangaroos, emus, goanas and god knows what else! So I had to be careful, while enjoying the ride 🙂

Anyways, I finally made it to Geraltdon, and I also finally found some wildflowers! This was of course after passing through about 100km or more of “wildflower country”, but great! I was only able to catch one species though, although it was late in the afternoon. BUT that species was a species of cuckoo bee! 😀 Tonight, I camp by the beach, and the ocean is my shower!

From WA with love,